Miss Sue doesn’t like sharing me with anyone or anything. When it came time to trade in my old car for a new one, she started sulking around the apartment. I first introduced her to the new vehicle when I put her new seat cover on and let her try it out. She wasn’t getting back out. Maybe it isn’t about me…

Dogs love going for rides, but don’t leave them in a car. Temperatures can reach 130°F to 172°F within a couple minutes. 5 minutes is all it can take to put your pet’s system into arrest. Check out this video where they bake cookies inside a car.

Is there something that your dog can’t live without? It’s probably something normal and reasonable, like water and food. Maybe a couple will say some toy or chew, maybe cookies. Sadie Sue, though…Sadie Sue has discovered Smartfood White Cheddar Popcorn. So, now my dog is doing Smartfood spots instead of her theater. I’ll do what I can to get her back on track, but I can’t make promises! 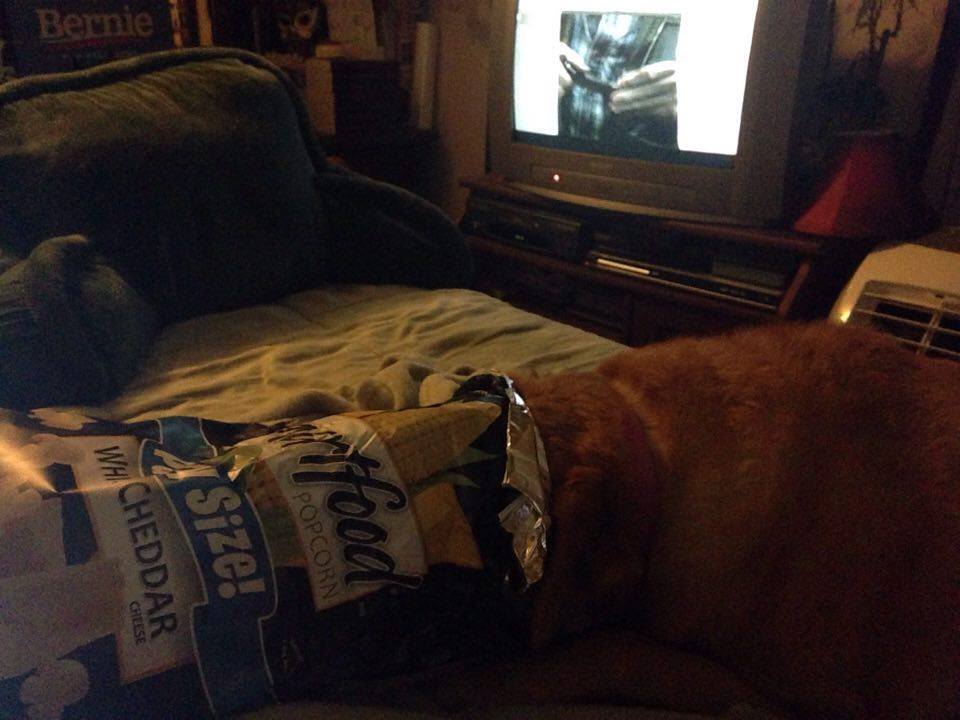 Watching Sam and Dean, and havin’ a snack!

Popcorn isn’t the best food for your dog, so please don’t over indulge them. This video is just for fun!

We have an eggstravagant addition to the Theater this month. It’s Ostaraful of fun! Pull up your spring green tufts of grass, have a seat and enjoy!

Well, that was as colorful as a Styrofoam package full of dyed eggs. Sadie Sue never disappoints. Here’s a video of the girl opening her Easter basket this year. Yup, she gets an Easter basket. I figure that since dogs lives are so short and they give us so much in that time, the least I can do is return some fun and love the best way I know how.

So what did the Shagbottom get in her basket? Lamb Lung. Thanks, Bark Box. 🙁 LOL

Here are the outtakes for extra measure…

Easter. How do you celebrate/What does it mean to you?

When I was a child mom and dad would do Easter egg hunts with little clues to our baskets. I remember the purple cellophane wrapped on my basket to this day, and mom still has our baskets. Last year she bought me some chocolate and did one up because my brother was home with us and it was a lot of fun. My niece got to experience her first Easter with us, that I remember. You’re never too old in my house to get a basket.

Now that we’re grown, and I am no longer curious about the church and the supposed reasons behind the holiday, it has become more like labor day than anything. The television will play some epic films. I wish I could stomach Charleton Heston, but he’s just such an ass I can barely stand it. It makes me sad they made him Moses. (Please laugh, that was terribly funny.) 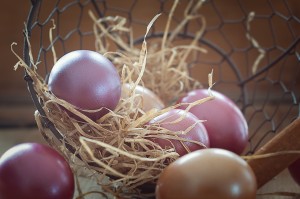 Being a historian and an all around good Celt, I learned a lot more about why eggs, bunnies and birds were associated with Easter more than Jesus. First of all, the dates are still in contention, much like Christmas, established several centuries ago according to some priest’s arbitrary idea and poor calculations. The bible wasn’t even put together until four centuries after the supposed death and rise of the savior. That historian part refuses to blindly accept what the Catholic church put together by way of executions and other oppressions. The church is steeped in blood and I simply couldn’t do it anymore (about ten years ago, I officially walked on). I felt, deep in my gut, that the church is a surer way to hell than to rising.

I remember sitting in a funeral and seeing the priest, and noticing how he spoke from the side of his face and it alarmed me. Scripture ran through my head. I remember my mother saying that it wasn’t right that films portrayed the devil being able to access the church, but it made so much sense to me that he could—manmade structures, housing manmade ideas, that’s his total M-O. The site of that priest was like a nail in the proverbial coffin. Yikes.

As well, it offended me that I knew more about Christianity than its adherents and I knew more about the reason for all the aspects of it. They ignored that, denied it, and threatened. The fact remains that every aspect can find preexistence in other faiths from centuries before, and after the start. Not a thing is original. They really are pulled in from various cultures and beliefs—the eggs and rabbits having to do with Ostara. Yes, even the lilies.  The ducks. The colors…all of it. 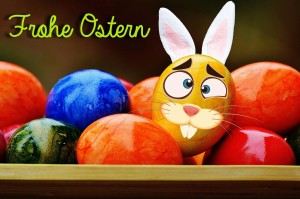 In 2005 I met a Jehovah’s Witness from Australia. She is an amazing artist and I love the memory of our friendship to this day. I helped her and one of our other friends come together. He moved to Australia to be with her and take on the mantle of husband a few years later. Because I left the online environment where we had met, I lost contact with them. However, that is not the point. What I learned from her about her faith taught me a great deal about what I knew and was thinking. Basically, she confirmed that the way in which many follow the faith is more of following the faiths of their ancestors and some mishmash of things thought up in the middle ages. Did you know that they don’t celebrate their birthdays? The belief is that that is not going to happen until they are risen. That right now, they’re just a husk for a possibility of forever. My dad jokes, think about how long that faith has been in existence, and how many have been witness and only so many are going to make it…why are they still following? They’re going to bump someone off the list? Yeah, seriously. Either we are all saved, or none. I can’t imagine a God that gives up on any of us, unless it is us who refuses him consistently and purposefully. That’s pretty startling when you think of men and women like Charles Manson and Adolf Hitler—did God forgive them or are they in hell? What about the creators of the church who are false? Was Dante correct? Are they ass up in kettles getting tormented by devils?

I really often want to believe they are.

In fact, I view my God more like the Judaic God. I am quite drawn to that faith although I am influenced by many philosophies.

As for Easter–I see it as the pagan celebration of Ostara. I celebrate it with food, family and the idea of the renewal after the dying times. It is potential. Right now, I have a giant Reese’s rabbit and egg, a sac of Reese eggs and classic jelly beans and Peeps, which are my favorites, all year.

On Saturday, we got the Matriarchs together (so very symbolic of the fertility rites of the time) and my mom made us a great big pan of Lasagna. I think she might be a kitchen witch, so I bought her one for her kitchen (a dutch tradition for protection).

Sadie got a basket of treats in the tradition of our family (more toys than sweets). Her videos will be up on the Shagbottom Section this Friday, so please stop back and check it out! 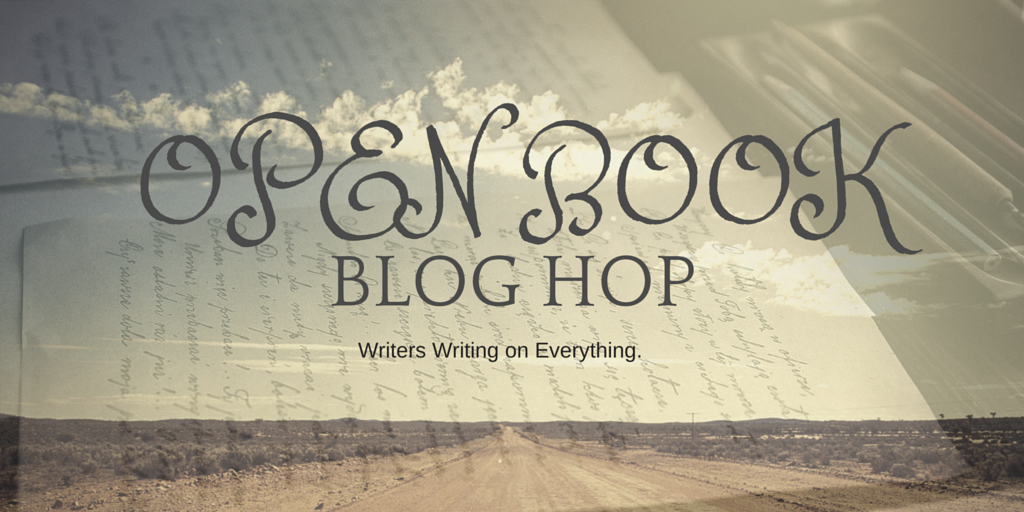 If the code isn’t working, please hit the back button to return to the link up from another blog. Working on getting this fixed.

Never one to shy from controversy, our dazzling, flame-haired star is at it again. This time, she’s taking on an old political adversary. It was only a matter of time that she came out with her endorsement as a parade of celebrities already have before her. Miss Sue doesn’t like being last. She’s pretty sure she’s on a certain Congresswoman’s shit list from here out, but Sadie isn’t mentioning names because she’s not inadvertently supporting the other campaign with mentions that will ping on Google.

Here’s the image from the video, which you can use online… 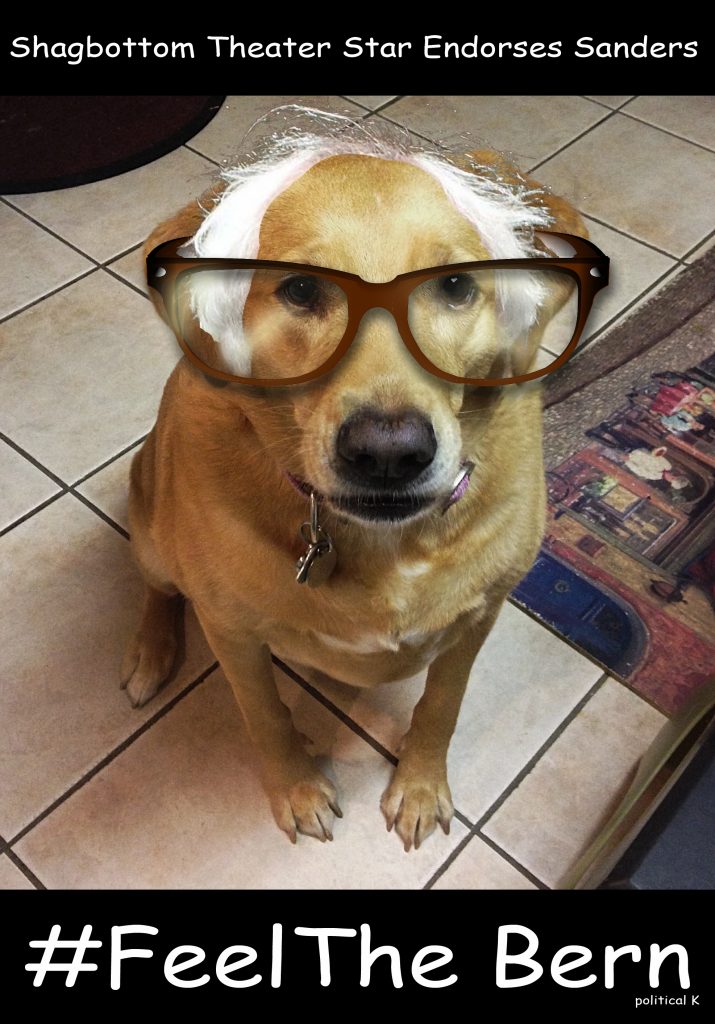