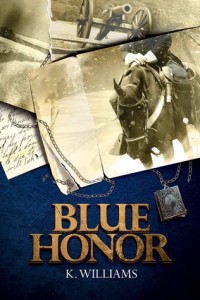 Blue Honor tracks four tightly twining families during the American Civil War. Each member is asked to sacrifice more than their share to see friends and loved ones through the terrible times. The only certainty they have is that nothing will be the same.

Emily Conrad is the bookish daughter of a wealthy dairy family from Vermont. Her indulgent father has educated her and bred ideas that aren’t acceptable to her more urbane mother, who thinks Emily needs to settle down with her longtime friend and town philanderer Evan Howell. The outbreak of war frees Emily from these expectations for a time, but a stranger soon arrives after the guns begin to blaze, threatening her plans more than societal conventions ever could.

Devoted to the young woman who healed her wounds, Henrietta has become part of the Conrad family, hoping that she may one day see her husband and son again. As a runaway slave, she’s been lucky enough to find this slice of peace in Vermont, but the return of Evan Howell and the man he brings with him portends great change that might see her locked back in irons, if not executed for what she’s done.

Evan isn’t as bad as his reputation has made him out to be. He knows his chum Emily will make the best doctor Vermont has ever seen, and he knows he’s not the man to marry her. With a little manipulation, he convinces his commanding officer, Lieutenant Joseph Maynard, to take leave with him and see the beauty of the north. He just doesn’t let on it’s not hillsides and streams he’s setting the man up for.

Joseph has both power and privilege as the son of a Baltimore lawyer, but neither can guarantee him the things he wants in life. His commission in the army is likely to lead to death, a sacrifice he was willing to make to end slavery in the States—that was until he saw Emily Conrad. Torn between duty and desire, Joseph struggles to stay standing for that which he once held strong convictions. War weary, they all march on to duty…

To order from your local retailer use: