All Things Zo. All The Time.

See more Zo Duck at ZoDuck.deviantArt.com. Support the duck by buying a print or book from K. Williams.

The Latest Zo Duck Articles on The Blue Honor Blog. 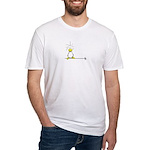 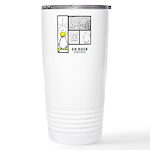 After years of waiting, fans of my Zo Duck cartoon no longer have to wait for the next work in the series. A lot of what I do has taken me away from doodling the duck. Months ago, however, I did another sketch. I am sad to report that the original was lost. I left it behind at a training, of which I was called away from for other business. Retrieving the name tent on which it was drawn was not possible. Thankfully, I had taken a picture with my phone. That’s the best that I have of this one. Unless someone, for some reason, kept it. We’ll never know.

This new piece is one that I will likely try to recreate by hand in the near future. Such loss is traditionally met with hysterics and a sense of doom, as if it were the last I’d ever have drawn. Somehow, this particular drawing reignited my drive to do more Zo. It’s my hope to sketch my wily, feathered imp much more frequently.

Zo Under Glass (Behind Glass?) In December, readers were introduced to SpaceDuck Zo, a part of Zo’s series that revolves around her dream of being a space explorer. As you saw in that strip, not everything goes as planned. Sometimes, though, Zo has very beautiful moments in her adventures. For instance, there’s today’s addition to the SpaceDuck Zo series.

Although Zo isn’t a human, she still shares our fascination with the ghostly satellite. In the image below you get sense of her reverence. Did you know that the moon takes a front and center role in The Trailokya Trilogy? It does! The Moon Order is the battalion of which the main character of the series belongs.

Space Duck Zo is my first cell comic of the series. It depicts our heroine falling asleep while watching her favorite scifi show. Of course, this seeds her dream, and she imagines herself as a space captain facing off with nefarious aliens. Things, however, don’t quite work out as expected.

This episode highlights the fact that Zo has very tiny wings for her size. Despite her desire to be a super heroic figure, she finds her number one difficulty coming to haunt her pleasant dreams. And, Zo has every right to be upset. You know how you feel when the hurdles you face start haunting the space where anything should be possible.

Zo overcomes her limitations in waking life and carries on a normal and happy life doing the things she loves. You’ll see her using tools to help make her art and tasks easier. She’s one smart cookie and navigates her world using her brain power. That’s probably why she gets so mad here. Her brain power wasn’t exactly under her control, and that is easily upsetting.

Smarts are all you need, Zo. You can overcome anything with ingenuity. You could even be Space Duck Zo. How can I begin to explain ZoDuck to you, dear readers?

Born during my early college years, when I’d get bored and do cartoon voices to decompress from the stress of my Bio major woes, ZoDuck started as one of a pair of shadow hand ‘ducks.’ Zo evolved to be a small mini winged, stuffed animal based on a stuffed critter I found at a hotel gift shop some years before that. Though she wasn’t a puppet, she was easier to hold. Alas, I had no interest in ventriloquism.

Zo didn’t die there. No. She harassed friends and boyfriends alike, disliking their closeness to me, in the little skits I’d put on, threatening them that she’d beak them if they ‘kept up their shit.’ That’s right, she wasn’t g-rated, and still isn’t. Sometimes people think I draw sweet little cartoons, or ones that are just a tad saucy. I can’t even.

My plans for Zo have been back burnered while I work on my novels, but she crops up now and then. I sketch one frame comics mostly. The most recent was ZoDuck Meets The Krampus. You might remember the drawing from Christmas. I thought the pair of them would be awesome together, being of similar temperament. Maybe there will be a grumpy cat and ZoDuck crossover someday.

If you go to my ZoDuck deviantArt page, you’ll see some of the work I’ve done so far. The plan is to eventually create animations. That takes time and money, both of which I have little of these days. In the meantime, I have drawn up a few storyboards, and continued the one frame comics.

Here’s a sample of my duck…

If you loved this article, subscribe to the blog to get more. Donate to the site by buying a book.