Welcome back! So you want to learn German…

Still plugging along! My vocabulary is building, but I still feel that the basics aren’t all in there yet. German is tough for one reason: Grammar. I’m really getting stuck on cases. If Duolingo concentrated a bit more on the necessary vocabulary, questions and statements first and saved this for later in the lessons, I think the world would be a happier place. Or, better yet, the grammar lessons they don’t include should be included. Explain to us why the cases are this way and what those words mean. What’s wrong with a reading bit, and then practice? Whatever, it’s meant to be an app that supplements your learning from good resources, not the center piece. But, I have to admit, I think it’s really really effective thus far (despite being stuck for weeks on the cases–nominative and accusative, I won’t even touch dative until I have the other two down).

But, I digress. This post isn’t about the cases. I’ve already gone over that when I started with them in an earlier post. I want to discuss the idea that the German language is harsh. When I began the journey, this is all I heard. I still hear only this from people. It’s all they know, a stereotype that others have used for tired old comedy skits. The language when spoken by a native isn’t harsh or loud or gutter sounding, not to my ear. I hear the flourishes of some french influence and even a bit of Latin from the corners of the Roman Empire. There is English in there, and an influence from the North and North East (of Europe, loves). It’s lovely and eclectic. That said, once in a while, something pops up in the vocabulary of the day app I have that makes me go…oh, hell no, I ain’t saying that.  And then I go look for an alternative word, because I am going to sound so silly saying may I have a bon-bon, when I am asking for a bit of candy…jeez, Louise! And in that case, there is no other word. I hope they know what candy is, or some kind, handsome, wonderful, native will take pity upon this sweet, innocent, American girl and tell me how to ask for a sweet without sounding like a snobby old French lady laying about in her satin covered bed clutching poodles to her feather draped breast (the room is all white, with sparkling chandeliers and a button headboard. Garrish gold fixtures…oh, gag). Speaking of stereotypes…

Recently, I came across a word in duolingo, like my beloved (beliebe?) Hasen. By no means is the word innocuous. You can say it with force and sound like you’re really angry about the lack of this item, or that the power in the utterance of such word adds a sinister meaning, but more importantly you’ll sound like you’re announcing the arrival of a nuclear waste created creature from the shores of Japan. Rasierer. 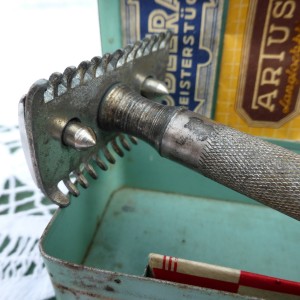 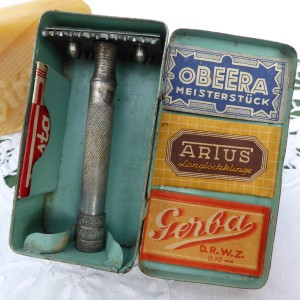 But don’t fear. The dude just wants a shave. Most men, even Germans, aren’t out to slit your throat and they certainly won’t demand you hand them the weapon of their demise as you watch them prepare for the day. He may have noticed the scruff upon your chin is growing in less than manly and should be scratched off before you’re laughed at in public for sparse beardedness. Or, perhaps, the gentleman noticed your legs are getting a bit fuzzy ladies (I’ve been told another stereotype about Europeans that totally negates that possibility). There are lots of uses for the word that it’s pronunciation (Rah-tseer-ah) should not worry you. As a Godzilla fan, it just fills me with delight and thus giggles and I can’t stop saying it. This is where the awkward comes in. Hase und Rasierer shouldn’t be uttered in the same sentence. Nein. For, if you do, surely you are expressing some sort of violence, Nephew Fred or Fatal Attraction style, that leaves us wondering at your sanity.