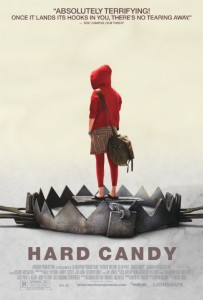 I was sitting on my ass last night with hardly any energy to do anything. Not that I didn’t have anything to do, I just haven’t felt like doing much of anything these past few weeks; for reasons I don’t want to get into at the moment. However, there I was, belly up, neck to toe covered with blankets, dog snoring on my side, cat purring on my chest, remote in hand and I’m surfing Showtime Anytime on my AppleTV—With any luck, I’ll get some kind of kickback from Showtime or Apple. Wink, wink!

So, I’m scrolling through an abundance of what I think are go awful flicks. Or at least nothing I want to see right now, when I come across something I’ve watched a few years ago and loved. That film was “Hard Candy”.

“Hard Candy” stars one of my favorite actors; Ellen Page. It is the film that put her on the map and made her famous and for good reason, she was bad ass! The film is difficult to watch and I don’t recommend it for everyone, however, it is a good film about good-ol’ fashion torturing of a pedophiles. Who doesn’t love pedophiles getting what they deserve?

The film starts out with a should-know-better adult having a very inappropriate conversation with a fourteen year old child on an online chatroom. The conversation is very sexual and would make any reasonable person shy away from it and maybe even call the cops. He is a sexual predator who preys on young girls by pretending to be a charming lovable man, getting them to meet, luring them to his place and then god knows what.

Sure enough, this P.O.S. manages to convince this young girl to meet him at an ice-cream place for a few scoops of frozen cow juice. Immediately, he goes to work charming her and pretending he’s just one of the boys as cool as can be. He boasts about his photography and how he works with young models and all that shit. It’s his game to get the girls interested so that they go to his place. After he mentions he’s got a bootleg copy of her favorite band, the girl reluctantly agrees to go to his place.

That’s when the movie takes a serious sharp turn. This young innocent girl, the one we’re all thinking is being played by this monster, shocks the audience when she drugs the pedo, ties him up and begins to torture him both physically and psychologically. I mean, she goes medieval on him. Hell, she made Marcellus Wallace look like a fucking pussy!

The film is terrifying to watch, it certainly isn’t an easy film to enjoy, but it is wonderfully done and beautifully acted. And the script is something to behold. How they managed for the audience to actually feel sympathy for a sack of shit pedophile is beyond me, but well done!

The performances by both of the actors were incredible. The chemistry between the two is just amazing and it speaks volumes about the talent that Ellen Page possesses as she goes head to head with veteran actor Patrick Wilson.

Hard Candy is surreal and for those who like a story straight out of the box you have to look no further. I highly recommended for those folks. I cannot recommend this film for those with a weak stomach or even the mildly squeamish.